Extracts from Pigot & Cos. City of Dublin and Hibernian Provincial Directory, 1824. 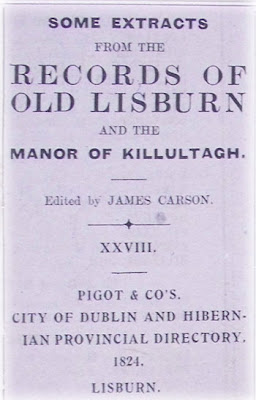 PIGOT & COS.
CITY OF DUBLIN AND HIBERNIAN PROVINCIAL DIRECTORY. 1824.


In the county of Antrim, is a borough and post town pleasantly situated on the banks of the Lagan by which it is separated from the county of Down, distant seven-three miles, north of Dublin, seven south of Belfast, fourteen south-east of Antrim, and sixteen north-north-west of Downpatrick. The parish church, which by patent from Charles II. was erected into a cathedral for the united dioceses of Down and Connor, is an extensive structure, and particularly distinguished for the architectural beauties of its fine lofty spire and steeple of cut stone. The Catholic Chapel has a plain external, hut the interior has a neat pleasing appearance. There are also here a Presbyterian Chapel, a meeting house for the Society of Friends, and two Methodist chapels. The vicinity of this town to Belfast in some measure prevents its rapidly increasing in extent; notwithstanding which the linen and corn trade are carried on with great spirit. The linen manufactured in this quarter has long obtained a decided preference in the markets. The corn market is likewise frequented as affording the best seed oats in the county. The linen-hall, where the weekly sales are made, is conveniently situated and sufficiently capacious; it was erected by the Marquis of Hertford, whose patronage the town enjoys. The inconvenience experienced for want of a suitable corn-market, will shortly be removed, it being in contemplation to erect a market-house by subscriptions, which now nearly amount to the sum requisite for its completion. The county infirmary in Castle Street contains upwards of sixty beds, and affords relief to twelve hundred out-patients; the surgical duties are ably fulfilled by Dr. Wm. Stewart, M.R.C.S. By the formation of a Philanthropic society in 1810, for the prevention of mendicity and the relief of beggars, great benefit has been derived. The industrious female, on application at the spinning institution, obtains the object of her wishes, constant employment; flax is distributed to her in small quantities upon security, rendering her independent of a supply of hucksters at the highest retail rate, and preventing the sacrifice of her labours to them, when the pressure of poverty deprives her of the power of waiting for a favourable market. A school for boys and another for girls on the Lancastrian system are supported by subscription. A Sunday school is held at the Presbyterian chapel, and by the legacy of the late John Hancock, Esq., a school has been built, which affords facilities of education to the youth of the Society of Friends. Previous to the Union Lisburn returned two members to parliament; now it sends only one; its present representative is Henry Seymour, Esq. The principal market is held on Tuesdays, and there is a minor one on Saturdays. There are two very considerable fairs on the 21st day of July and the 5th of October. The population is nearly 4,500.

Inspector of Roads.
Hunter, Joseph (and veterinary surgeon and Registrar to the Royal Down Corporation of Horse Breeders), Heron's Folly.

Coaches.
The Dublin Royal Mail, from Belfast, passes through at six in the morning, and returns at half-past eight in the evening.

The Fair Trader Day Coach passes through from Belfast to Dublin, at a quarter past six in the morning, and returns at seven in the evening.

Two coaches start from the Hertford and King's Arms, for Belfast, at half-past nine in the morning, and return at seven in the evening.

(Extract from the Introduction).

The following notes were written during the course of several journeys, undertaken for the purpose of examining the state of Education in Ireland as conducted in the various schools and seminaries supported, in whole or in part, by grants from the public revenue, and among these, a more especial manner, the elementary and common schools for the people at large, including the operations of those societies which are occupied, in that country, with the important work of popular education.

Proceeded to Lisburn; visited the free school connected with Capel Street Association for discountenancing vice; 180 on roll, of whom 99 Church of England, 65 Presbyterians, the other 16 Roman Catholics. The Scriptures read once a week by all the children. A circulating library, furnished by the Kildare Street Society, is kept in the school for the use of the pupils.

Went afterwards to the interesting establishment of the Quakers at Prospect Hill, called the Ulster Provincial School; seems excellently arranged for the health, comfort, and training of the children, particularly their moral discipline; 18 boys and same number off girls educated, boarded, and clothed; house well appointed and kept in the best manner, with garden, dairy, etc. The pupils pay £4 each on entering the school, but if the parents cannot afford to pay, the society does; annual expense of each pupil is about £21 they are received from the ages of three to fourteen; thoroughly instructed in geography, as well as reading, writing, and arithmetic, the girls taught by a governess and assistant, the boys by a master; he gives preference to Lindley Murray's books for English: uses Ruddiman's Latin Rudiments for the boys; some of the girls taught drawing as well as needlework, etc.; specimens of their reading and writing of the very best kind; some read from "Young's Night Thoughts" in the most correct manner: all capable of explaining what they read; showed also great proficiency in parsing and analysing the language: a thorough English education is the object professed. The appearance of this school is in all respects satisfactory; everything uniform, well contrived, and substantial without show; children remarkably clean, seemed healthy, animated and happy; at ease and self-possessed, with good demeanour; not forward, but ready; clothes plain, not remarkable from uniformity or studied costume; nothing, to outward appearance, seemed censurable or wanting; most of the children are apprenticed from the seminary, and in request as soon as ready. An apprentice, girl, trained in the house, assists the mistress in the care of the house. The school rooms well fitted up with all requisites suitable. The house can admit 45 in all. This society possesses some lands, and has received considerable bequests.

Lisburn is a prosperous manufacturing town, noted particularly for its fine damask: the ornamental finishing carried to great perfection, notwithstanding the defective looms, which are seemingly very old, and with much complication of the machinery.

Proceeded by the course of the Lagan, through a well cultivated country abounding with printing and bleaching establishments, and with all the marks of industry, to Belfast, within the county of Antrim, at the junction of the Lagan with Belfast Lough. The situation fine, with extensive view. This capital of the North bids fair to outstrip the towns as yet larger of the South; is more pleasing than Dublin, in the general neatness of the dwellings, and absence of the squalid crowds and idleness which there repulse. The people of this part of Ireland, Down and Antrim, are chiefly descended from Scotch settlers, and much intercourse exists between the two countries. In the features and dress, and even language of the people, little difference is discerned, and the general aspect of the country is nearly the same with that of Scotland. Oatmeal much used in the food of the people.

(This article was originally published in the Lisburn Standard on 27 April 1917 as part of a series which ran in that paper each week through 1917. The text along with other extracts can be found on my website Eddies Extracts.)

Posted by an extract of reflection at Wednesday, April 27, 2011