PRONI Lectures at the Linenhall Library 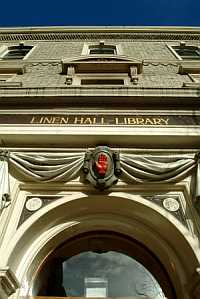 PRONI, which is currently closed due to its relocation to new premises in Titanic Quarter, Belfast, has announced that it will be holding a series of lectures in the Linenhall Library.

The Linenhall Library has agreed to host the lunchtime lectures delivered by PRONI staff on the last Wednesday of the month as follows:

23 February 2011: 'Preserving the past for the future' by Mr Brendan Campbell, Chief Conservator, Public Record Office of Northern Ireland.

The talks are free of charge and will start at 1.00pm in the Performance Area of the Library.

Posted by an extract of reflection at Tuesday, November 09, 2010