From bad to worse... or... There are two tales to every story 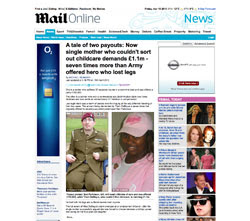 It seems like every other day there's a story appearing that makes you go "what?" and this week is no exeception.

Just looking through the MailOnline alone makes you wonder.

The story that topped it all has to be that of Tilern DeBique who won a sex discrimination claim over Army childcare and wanted over £1million in compensation... seven times more than that offered too Ben Parkinson who suffered 37 separate injuries in a landmine blast and was offered only £152,000 (although after a public outcry this was later raised to £570,000)

But it seems she didn't get it all her own way when she was only awarded £17,000

The MailOnline also carried the story of Nicola Hobbs who applied for a job but after a health check was told she was too ill to work. Then when she tried to apply for employment support allowance she was then judged she was fit enough for work. There is an argument that the criteria for the job she applied for meant she could be classed as fit for another job... BUT... the incredibly part of the story is that it was the same healthcare company contracted to carry out both assessments. One has to ask how independent these checks where or does it depend on whose paying the bill?

Things get worse again though when you read that a disgraced banker who stole £315,000 from his disabled niece's charity fund and only has to pay back just £1.  The good news here is that, according to the story, the bank has since refunded the entire amount back to the girl's family... now THAT has got to be worth a story on it's own... a bank being helpful!

There are two tales to every story it seems...
Posted by an extract of reflection at Friday, April 16, 2010