Extracts from the Records of Old Lisburn - Heterogenea, 1803 (part 3) 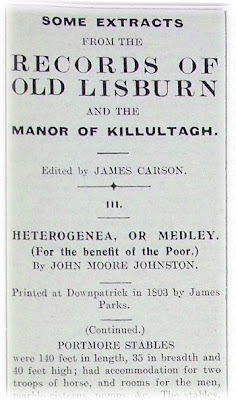 were 140 feet in length, 35 in breadth and 40 feet high; had accommodation for two troops of horse, and rooms for the men, marble cisterns, pumps, &c. The stables, built by the Earl of Conway about 1664; Dr. Jeremy Taylor, afterwards Bishop of Down and Dromore, resided here many years during the reign of Cromwell; there had been an old castle here before. The whole buildings were taken down in 1761, excepting the walls which surround the bowling green, gardens, towers, &c. Portmore deerpark a little distance from this, contained about two thousand Acres; about thirty years age this was one of the most romantic and delightful places perhaps in Ireland; it was stored with Deer, Pheasants, Jays, Turkeys, Hares, Rabbits and a variety of other kinds of game; many large oak and other timber trees. Earl Conway made canals here, duck-coys quays for pleasure-boats, &c.

situated in Lough neagh, about two miles from the shore, contains about six acres, on which is a round tower fifty feet high. The village of upper Ballanderry, (alias Largyvore) where fairs are held quarterly, for sale of Horses, Black-cattle, &c. partly the property of Mr. William Johnston, Lieutenant of the Ballanderry Yeomanry corps, of which the Marquis of Hertford is Captain. Near this are the houses of the Revd. Mr. Thomas Edward Higginson, Messrs. Edward Walkington, Edward Higginson, William Davis, Edward Seafton, Thomas Hunter, Robert Cinnamond, Thomas Higginson, late Hugh Casmont, Mr. Patterson, Edward Higginson Murray Linendraper, Jacob Harrison, Mr. Hasty, &c. From the Crewhill in this parish, the prospect is very extensive, Loughneagh in full view, which is thirty miles long and fifteen broad, Loughbeg, Portmore, Rams-island pillar, Shanes-castle, the elegant seat of Earl O'Neal, on the verge Lake; Longford Lodge, Lord Langford's part of the Counties of Derry, Tyrone, Armagh, Monaghan, Louth, Antrim, and Down; also the towns of Moira, Dungannon, Charlemont, Stewartstown, Lurgan,and Hillsborough, &c. This parish in general is good land as any of the province of Ulster.

on the side of the Mountain, built by one Robert Norton, in the reign of Queen Elisabeth was a strong Castle, eighty four feet long, thirty six wide, and forty feet high; the walls are nearly all standing. Mr. Waring has converted it to office houses. The village of Stoneyford, is on the verge of this parish, where Mr. James Boys has a Bleach-green. In the parish of Lambeg, is the village of that name, and the houses of Sam. Delacherois, Messrs. Richard, Thomas and Abram Wolfenden's who carry on the manufacturing of Cotton Paper and Blankets; Lambeg house now Mr. Henry Bell's Linendraper, Mrs. Barclay's, Mr. Williamson's, Mrs. Agnew's, Mr. Connor's, Mr. Richard Brison's, &c. The first Lord Conway Grandfather to the present Marquis of Hertford, made a race-course near the village of Lambeg about 70 years ago. In the 12th century O'Donnell built a monastry here; part of the walls of Aghalee, Aghagailon and Ballanderry old Churches are still standing; they were each seventy feet by twenty four, but no inscription.

and afterwards his successor, the Earl of Conway and his brtherinlaw Sir George Rawdon, brought over many natives of England and Wales here to tenant the estate, and their descendants still occupy the lands; some of their names were Gresham, Audis, Thurkilld, Antwistle, Higginson, Hastings, Waring, Close, Wolfenden, Mussen, Bullmer, Bunting, Blizard, Charleton, Aprichard, Gwilliams, Haddock, Peers, Wheeler, Breathwait, Barnsley, Carleton, Conway, Garrett, Bennett, Gregory, Waters, White, Pearce, Grainger, Willis, Shillington, Hammond, Moore, Smyth, Richardson, Clark, Hopes, Peel, Bicket, Lamb, Hodgkinson, Carter, Courtney, Weatherhead, &c. &c. This estate is as compact as any possibly can, being of an oval form about sixteen miles in length, from Clogher and Ballymullan-hills in the County of Down to Hog-park point, or Shanport in the County of Antrim, which run into Lough-neagh; and about ten miles in breadth from near Moira to Crumlin. It is one of the most populous, best improved, and occupied by the most wealthy and substantial Yeomanry of any perhaps in Ireland. The farms in general are from twenty, to one and two hundred Acres or upwards each; the houses are neat and in general white, surrounded with fields, well cultivated and well planted, much after the English fashion; the tenantry being descended from Englishmen in general, and follow the customs, manners, industry and religion of their ancestors: they are a loyal and spirited people, much atached to their excellent religious and good King, and inimitible constitution. The different Yeomanry corps in this estate or territory, amount to about one thousand men; two troops of Cavalry and nine companies of Infantry.

Leases of this whole estate for three lives or forty one years, were granted from 1740, by the late Marquis of Hertford, from two to five or six Shillings an Acre, but his Lordship got fines. Some of the lives are still in being, but they are dropping off every year; when the whole expire the estate will be between fifty and sixty thousand a year. This estate is improving in building, planting Orchards, liming, &c. and will become a terrestrial paradise, or may be called the Garden of Eden in Ireland.

To the Lisburn 1st Company of Volunteers

Sweet Lisburn, fairest village of the vale,
Thy beauties have, and always shall prevail.
The loveliest town, of all the north'rn plain,
Whose worthy sons, still did their rights maintain.
Who for sweet liberty, in days of yore,
And for their country, still achiev'd much more
'Gainst that bold rebel Sir Phelim O'Neill,
Who o'er thy loyal sons thought to prevail
Who stem'd the torrent of his wicked rage;
And grac'd the annals of historic page;
Rawdon's brave troops repell'd his bloody crew,
And many in most dreadful battle slew.
Now should proud France, oppose, or timid Spain,
Fair Lisburn's sons, would freely fight again,
Her Volunteers are all both firm and true,
And gallent men, as ever triggers drew,
They would stand forth, maintain our wholesome laws,
And speak, and act, and bleed in paddys cause.
Still let the task be yours with active zeal,
To guard the honours of your Country's weal;
Her rights restore, her sinking laws reclaim,
And wake in every breast the patriot flame.
Our spirits chear'd, by hope's enlivening ray,
That shortly we shall see the glorious day,
When all oppressive laws shall be repeal'd,
And national freedom, be entail'd;
Fair Lisburn's sons shall then in concert sing,
With grateful hearts, "long live great George our King."

(Editorial Notes on the Heterogenea next week.)

(This article was originally published in the Lisburn Standard on 3 November 1916 as part of a series which ran in that paper each week through 1917. The text along with other with some other extracts can be found on my website Eddies Extracts.)


Posted by an extract of reflection at Tuesday, November 02, 2010