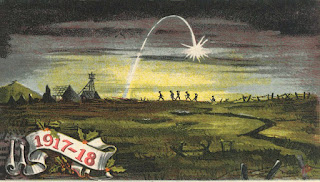 The bells of Christmas sweetly ring,
Glad tidings of great joy they bring;
On this bright and happy morn,
Unto you a Saviour’s born;
Pealing over hill and plain
Comes once more the glad refrain;
It echoes through the lonely-glen,
“Peace on earth, goodwill to men.”

Peace on earth, when war is rife
And nations meet in deadly strife,
When sorrow surges all around,
And pain and suffering abound.
O Christmas bells, on this glad day,
We yearn for loved ones far away;
For round the hearth a vacant chair
Tells of a loved one wanting there.

And memory brings again to view
Happier days that once we knew,
Days when we welcomed in the birth
Of Christ the Lord, with peace on earth.
O Christinas bells, ring out old strife,
Ring in a purer, holier life,
When war for evermore shall cease,
And man with man shall dwell in peace. 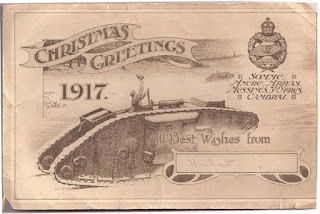 Poem from The Witness, 21st December 1917
Image Top:  A card made in 1917 by the 46th (North Midland) Division showing soldiers crossing no-man’s land, illuminated by a flare or shell.

Posted by an extract of reflection at Tuesday, December 26, 2017 No comments:

Those of us who remember the instrumental music controversy, and not least I, myself, can never forget the excitement which this controversy continued to create in the Church, and the utmost apprehension with which each new meeting of the Assembly was regarded. Each Assembly was preceded with letters on both sides, and there was much discussion in congregations, and sometimes in Presbyteries, on the subject. The Assembly of 1879 was a great year for memorials. There were forty-seven memorials in all – some from sessions and committees, some from congregations. The majority of these memorials were from anti-instrumentalists. Eight demanded immediate compliance with the deliverance of 1873, and four recommended the cutting-off of recalcitrant congregations, or rather suggesting that by their own voluntary act these congregations had cut themselves off. The most numerously signed memorial was from the Instrumental Party, and had 1,879 signatures — one for each year since the Christian era — and it prayed for the suspension of all action with regard to the congregations under surveillance.

At this meeting the vote took place on the Moderatorship – a rare incident nowadays. Fifteen Presbyteries nominated the Rev. Professor Watts, and twelve had nominated the Rev. Jackson Smyth, and as no other arrangement could be made a call of the roll was demanded, and the Rev. Professor Watts Vas elected by a majority of fifty-two. Mr. Smyth afterwards known as Rev. Dr. Jackson Smyth, was a highly respected and honoured member of the Church, whose claims to the Moderatorship were many. He was a brother of the Rev. Professor Dr. Richard Smyth, Member of Parliament, and one of the most honoured of ministers and members of Parliament, who had died during the year, and his family as well as personal associations were many and distinguished. But for that year, at all events, the Assembly, preferred the Belfast professor, who had rendered great service to the Church as a professor and as a defender of sound Church theology known all over the Presbyterian world. Mr. Jackson Smyth, however, had not long to wait for the Moderatorial honours, as he was elected Moderator the following year. There was one additional incident of this Assembly worth mentioning. Mr. John Brown, who was a most loyal Presbyterian, was Mayor of the town for the year, and on the opening evening he attended and invited the members of Assembly to a conversazione, which was afterwards given in the Ulster Hall, and was a most pleasant and agreeable function. Similar or corresponding functions have been frequent since, but this, I think, was the beginning of them, so far as my memory goes.

The report of the Committee on Instrumental Music presented at the Assembly by the Rev. John Macnaughton was that matters remained substantially as they were, but in the case of Queenstown and Enniskillen the committee had received such statements from the ministers and congregations declining to fall in with the deliverance that they had not attended. Mr. Simpson, of Queenstown, wrote that if the Assembly would remove instruments from all Sabbath-schools he would remove his from the church. In the report the committee detailed all the circumstances, but while regretting the non-compliance of the recalcitrant congregations with the deliverance of the Assembly, they, stated that inasmuch as the use of instruments was not in itself sinful, they did not propose to exercise discipline on ministers or congregations who on their own responsibility had introduced instruments into churches, prayer-meetings, and Sabbath-schools. The Rev. Mr. Petticrew brought forward his amendment, demanding compliance with the deliverance of 1873, and instructing Presbyteries to see that it was carried out. This amendment was seconded by the Rev. Archibald Robinson.

The battle began, as usual, on Friday, and continued during the forenoon sederunt, when an adjournment took place in the evening. The real interest centred in the evening meeting, as it had been arranged that representatives of the memorials on both sides of the question should be heard. The gentlemen chosen to speak were Messrs. Robert MacGeagh and Josias Cunningham, on behalf of the “Liberty” or Lay-men’s memorial; and the Rev. N. M. Brown and Mr. J. D. Boyd, both of Limavady, which was almost as distinctive as Glendermott in this fight, were selected to speak on the part of the anti-instrumental. The excitement as well as the attendance at this meeting exceeded if possible any of the previous ones. It was with the greatest difficulty it was possible to keep the doors and passages clear, and the police had to be called in to the aid of the very civil ecclesiastical authorities to restrain the crushing crowds. I remember many wonderful sights and scenes in May Street during Assembly times, but this was one of the most remarkable, arising chiefly from the introduction of these lay memorials and their representatives. In fact there were almost as many people outside the building as in it, and as a matter of fact, when the time for voting came a number of ministers, including the Rev. Dr. Magill, of Cork, and Rev. Dr. Kirkpatrick, of Dublin, had found it impossible to get into the church, and their votes were lost.

I can recall to this hour the excitement and the enthusiasm manifested by the instrumentalists, as the large deputation of the memorialists filed up to the platform. Those who knew Mr. MacGeagh expected a rich treat, and they were not disappointed. Under the signature "Nec Tamen Consumebator” he had contributed a series of articles to “The Witness” on the question, which were characterised by that great incisiveness and force both of argument and of humour of which he was such a master. Neither was lacking in his speech. I remember his introduction of the old story about Daniel O’Connell and the fish, which Mr. MacGeagh told with all humour and point. As he told it it is worth repeating — it was told apropos of the point that while the Purity party dwelt so much on the question of conscience, they ignored the fact that the Liberty party had consciences too. This is the story — “It is a story,” said Mr. MacGeagh, “of the late Daniel O’Connell when on one of his frequent trips from Dublin to London. He was crossing on the Holyhead steamer, and settling down in the cabin to dinner he found on the dish before him a very good salmon trout. The day being Friday and the air keen and Dan being sharp-set he coolly transferred the entire delicacy to his own plate, apologetically remarking with a comical glance at his fellow-passengers, ‘Gentlemen, you will excuse me, but this is a fast day in my Church.’ A stalwart cattle-dealer seated opposite, who had been covetously eyeing the dainty, too modest to ask for a portion, was dumbfounded for a moment by the coolness of the procedure, but recovering his wits he seized knife and fork, stretched over the table, severed the trout in two, and bearing off the larger part, exclaimed reproachfully to O'Connell, ‘Bad manners to ye, do ye think nobody has a sowl to be saved but yourself?’ So I may ask these gentlemen,” continued Mr. MacGeagh, “Do you think nobody has a conscience to protect but yourselves?”

Mr. Josias Cunningham, the other representative of the laymen, a gentleman well known at the time, and remembered still, being represented by a fine family who are a credit to the Church, country, and to philanthropy also, in the course of an able and original speech indulged in a joke that created much amusement at the time. It had a point; at anyrate it had teeth in it. “Sometimes,” he said, “they were told not to use instruments in praise, and what were they to use? A poor fellow once who was a singer in the church lost his teeth so that he could not sing, and he was told to go to a dentist. On going back to the church with his false teeth there was a theological row, and he was told that he was using an instrument, and could not sing there any more.” It is, perhaps, because these lighter things of the speeches remained longest on my memory that I reproduce them, and I think they are worth repeating, for their humour at any rate. The Rev. Mr. Brown and Mr. Boyd, of Limavady, followed on the other side with vigorous and telling speeches, the latter rousing the ire of some of the instrumentalists by some reference he made which created a bit of stir, during which the Moderator asked as a favour if they would have mercy on him. The vote was afterwards taken, the Rev. George Magill, the Rev. William Irwin (Castlerock), and the Rev. William Park being the tellers. Rev. Dr. Magill and the Rev. Dr. Park, as both are now entitled to be called, are still with us, with a marvellous buoyancy for their years. Dr. Magill has travelled further on the road of life than Dr. Park, and has retired from active service. I talked with him only the other day, and he still retains much of his old keenness of intellect, quickness of wit, and readiness of anecdote. Dr. Park is still almost as fresh as, if he had only put on his armour.

The call of the roll, which occupied well on to the usual hour, and took place shortly before midnight, resulted in a vote of 313 for the amendment and 278 against — a majority of 35 for the opponents of the instruments. This ended the great debate of 1879. I may be slow in coming to an end, but it must be remembered, that the controversy lasted over a decade and a half, and this was the eleventh year. I am dealing with it year by year rather than in a general summary, as there were special incidents each year recalled as I look up the files. Indeed, these would, have tempted me into further excursions, but I must have respect for space and the patience of the readers.

Posted by an extract of reflection at Wednesday, December 20, 2017 No comments: