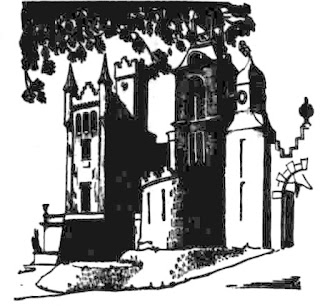 Estate that was built up field by field

JOHN Cleland's monogram can still be seen on the shields held by the snarling gryphons that guard the doors of Stormont Castle. The Castle is excellently preserved, since the lofty reception rooms are used by the Prime Minister and by the Cabinet, but the monogram and the ornate memorial to Samuel Jackson Cleland that nearly over-shadows Dundonald Church are almost all that remain to remind us of the family around whom legends of misdeeds have grown.

About four years before hia death in 1834, John Cleland, Rector of Newtownards, tutor to the young Lord Castlereagh and sometime agent for Lord Londonderry, built a large plain house on the Stormont estate he had acquired.

During the time when he was agent for the Stewart estate he resided at Newtownards, and it was there that he laid the foundations of his fortune. It is said that he refused to take banknotes from the tenants, demanding payment of rents in gold. As that commodity was scarce, he constituted himself moneychanger, charging as much as 5s in the pound for changing notes.

He thus amassed a large amount of money, and with it he purchased, field by field and farm by farm, the wide estate of Stormont.

Cleland must have been the most hated man in County Down, for in addition to his illicit discounting, he was a fierce and persistent magistrate, hounding most cruelly those against whom even the breath of suspicion blew.

We can read in "Ulster Life" of 1796, whet James Porter thought of him, for in that book he is portrayed as "Noodledrum." It was Cleland who was largely responsible for the hanging of James Porter of Greyabbey, and for the cruelty, injustice and severity meted out to the Presbyterian minister of Portaferry.

In 1797 this magistrate, Cleland, burned out M'Cormick’s Inn at Newtownards, and had the unhappy landlord imprisoned because some of his customers had been overheard in treasonable talk! The house of a Dr. Jackson was raided, robbed and burned because the doctor was suspect.

At the Spring Assizes in Down in the same year, Cleland had so interfered with the jury panel that was to try political prisoners that he was most bitterly attacked by the defending counsel, John Philpot Curran.

Lord Castlereagh, his former pupil, wrote thus of his teacher: "Cleland richly deserves to be tossed in a blanket . . . I will take a corner." Later he wrote to relate an attack on Cleland's life:

"Cleland very incautiously went out last night and was attacked by some villain who owed him ill-will. In the dark he snapped a pistol at Cleland which misfired and Cleland fired two shots without effect at him."

Samuel Jackson Cleland, who succeeded to the estate, enjoyed his father's ill-gotten gains for a short time only. In 1842, whilst he was abusing some workmen who were not proceeding sufficiently speedily with the demolition of a wall that obscured his view, he was killed when the wall in question collapsed on him.

The memorial that stands hard by Dundonald Church was erected to Samuel’s memory by his wife, and it was she who later added towers and turrets to the large plain house that John Cleland built at Stormont.

Posted by an extract of reflection at Tuesday, January 19, 2021