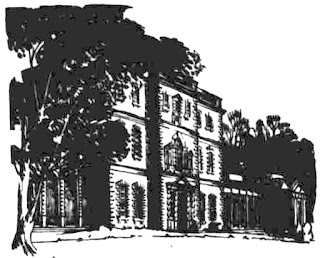 Travelling from Enniskillen on a day when the sky was as tender a blue as an angel's eyes, when the blackthorn was starred with white, when every tree wore green lace and when every hedge and ditch was thickly clustered with primroses, I came to Florencecourt.

The house is in the centre of a green and fertile plain, surrounded by an amphitheatre of blue hills. It is said to be the finest mid-Georgian mansion in Ulster, but more than that, it is a beloved home, bearing the fragrance of a long and honourable past.

There has been little change in its appearance since the house was built about 1736. except that slates have replaced the original oak shingles of the roof.

Stately in the beauty of warm stone, the house overlooks a rolling demesne. A pair of toy cannon guard the great front door of pine on which gleams a fat brass knocker These cannon, taken from an American privateer, are fired to celebrate the coming-of-age of the heir.

The interior of the dwelling is cool and graceful. Many of the ceilings were decorated by Italian workmen; charming cherubs blow out their rounded cheeks on the dining room ceiling, and throughout there is the loving attention to detail found only when workmen are also craftsmen.

Florencecourt was built by Sir John Cole, who was the first Baron Mt. Florence.

Enniskillen owes much to the Cole family. Sir William Cole, who was Plain Captain Cole when the Commissioners of Plantation arrived in Enniskillen in 1609, so protected the town that he saved it from the horrors of the 1641 rising. Sir William, knighted in 1613, the year that he became first Provost and Warder of the Castle, was responsible for warning the Justices in Dublin of the intended rising of October 23, 1641.

It happened that a certain Captain Rory Maguire had invited Sir William, together with other prominent citizens to dine with him. It was Captain Maguire's intention to hold his guests hostages for the cession of Enniskillen. However, a relative of Captain Maguire, Brian Maguire, warned Sir William of the plot, whereupon he hastily departed.

The other guests sensing something amiss, departed also, and the plot was foiled. Sir William despatched a messenger to apprise (he Justices, but unfortunately there was a delay and the Justices did not receive the message until October 22, the day before the rising.

Negotiations are now on hand for the National Trust to undertake the upkeep of Florencecourt, so that there is a distinct possibility that at some time the public may be privileged to view its beauties.

Posted by an extract of reflection at Tuesday, June 30, 2020