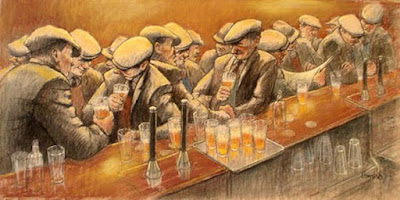 Our homes in these Western Islands, the land of the brave and the free,
Are encompassed by mountains and rivers, and valleys delightful to see.
We rise to our toil in the morning, and work while the children play;
In safety we lie down and slumber when night brings the close of the day.

We love the dear land of our childhood, where our forefathers suffered and bled,
We cherish the freedom they purchased, and honour the glorified dead.
See the sweet-smelling hedgerows in blossom, the forest when summer is nigh;
The fields of the ripening harvest, or the leaves as in autumn they die.

Visit the lakes of England, the valleys and mountains of Wales,
The moors and the lochs of Scotland, or Ireland’s glens and dales;
Hear the wildbirds in the the morning as with joy they break forth into song,
Then you’ll know why we love our dear homeland, why we love it so deep and so strong.

To protect and defend our possessions our gallant forefathers have fought,
And freedom from foreign invasion our fleets on the Ocean have brought.
We have prospered beyond expectation, like bee-hives bur cities are filled;
We opened our doors to all nations, tho’ many industries were killed.

Did they all love and value this freedom, and in midst of us loyally live?
No! the Germans were plotting against us, they had nothing but hatred to give.
Their spies were all over these islands, in our army, our workshops, and fleets;
In positions of trust and of power, ay, and some of them played on our streets.

They envied Old England her glory, and her Colonies over the seas,
“Britannia, the pride of the ocean,” they hoped to bring down on her knees.
Yet a foe more aggressive and cruel is stalking through Britain to-day,
Whom we must endeavour to shackle, and deprive of his powerful sway.

This, foe, ever lusting for conquest, who desires to make you his slave,
Is the fiend from the darkest of regions, sending noble men down to the grave.
Rise up in your might and defeat him, by sacrifice you will succeed;
King George set a noble example, and expects you to follow his lead.

This enemy enters your dwelling as a friend, though a foe in disguise,
And many a home that was happy he destroyed with his treacherous lies.
To eject him for ever from Britain unite in your strength one and all,
And fight in a fight to a finish, against this foe, King Alcohol.

Posted by an extract of reflection at Wednesday, April 05, 2017