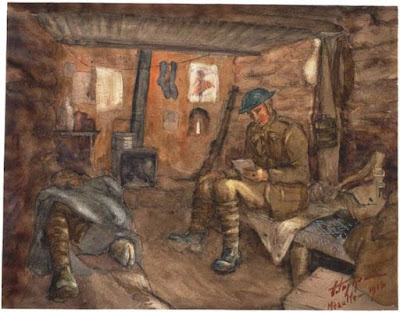 Oft,
When there's a lull in the fighting,
When shadows of night shade the plain,
When the cannon has long ceased its booming,
When peace o'er the earth seems to reign;
When the soldier is resting, preparing,
The morrow to face with the brave,
When the dead of the battle are buried
In a blood-sodden sort of a grave.

I dream in my sleep of the homeland,
Of the land that is far, far away,
Of the ones that I love, oh, so dearly,
Of the youngsters so happy at play.
Of the home on the hill-side, o'erlooking
The plain where the rivers entwine,
Of the trees and the woods and the pastures,
Of the forests of fir and of pine;

I partake of the pleasures of childhood,
Of the games and the sports of a boy,
I finger with tenderest longing
Each dearly familiar toy.
I live in the scenes of my childhood,
So happy and careless and free;
But a blast of the bugle awakes me,
And the fairest of memories flee.


(Written in a trench while serving with the
British Expeditionary Forces.)


From The Witness, 6th October 1916
Image: The Artist's Own Dug-Out on the Albert-Braye Roadside by William Topham, 1916.


Posted by an extract of reflection at Wednesday, October 05, 2016