Three or four weeks ago I furnished in this column a few notes on camp life from the pen of Rev. J. N. M. Legate, B.A., minister of Grooms port, who is at present on service as chaplain somewhere in France. So many people have expressed their appreciation of these notes that I am tempted to-day to give the following most interesting picture from the same pen. I am stare your readers will peruse it with as much interest as I have done:–

"I am still in the same camp; but I think there is a likelihood of my soon being removed to another place to take charge of a convalescent camp, where I would come into touch more with wounded soldiers. I have come to like this place very much, in spite of the hard work, and I like my colleagues, too; but, of course, I am a man under authority, and if 'the head' says 'Go,' I cannot say 'Nay.' The same address, however will still find me.

"I am still enjoying life here very much. The interest has been growing every day, due to events of which, I expect, the papers have already made you aware. Big business is being done somewhere in France.

"I have not much to tell you in the way of news, or rather, I have, but I dare not. But last night during a sleepless hour I thought it might interest you to learn what a typical evening here in camp is like. We have two huts here named Y.M.C.A., one of which contains our little sleeping apartments, each a little larger than a ship's berth, and our messroom; while the other part of the hut is used as a canteen. Then attached to that there is a fine big concert hut, which has a piano, a little the worse of the wear! And at the other end of the hut is a little 'quiet room' for reading or writing in.

"Now, supposing you were here about 6 o'clock p.m. you would see (possibly) lined up outside a long row of motor waggons, some bearing the Red Cross, and some filled high with troop supplies; or it might be a long line of motor bicycles, or (whisper it) an equally long row of machine-guns, or field guns, or air-craft guns! Through the door of the hut come trooping in all sizes and descriptions of men – some with clothes white as snow (these are the field bakers), some in green corduroy (the Army Labour Corps), some with big fur coats and full kit on their backs, and mud from the trenches on their whole outfit, and the joy of home-going lighting up their whole countenance, and others again fresh from the old country, singing and laughing and joking with joy at being at last allowed 'to really do their bit' (but see these men later on, on their way from the fighting line, and I venture to say their singing will not be so loud, nor their jests so hearty! At least that is our experience of the men we have met coming down from the line).

"As the men come into the hut they make a bee-line for the canteen, where the steaming mugs of tea or cocoa, or 'Horlicks' and the whiff of 'Woodbines' or 'Nosegay' make the atmosphere warm, and hearts more contented with a lot that is not easy. Then, according to what night of the week it is, so is the entertainment provided. About 6-30 o'clock – e.g., I take my Bible-class into the quiet room. And till 7-15 o'clock we have a talk upon one of the Parables; or a sergeant-major holds a first-aid class; or the Welsh minister takes a short prayer-meeting; or an informal debate is carried on on some subject, such as (on last night) 'Is Man Descended from Monkeys?' Then about 7-30 o'clock a sing-song is started in the big hut, and it is most astonishing to hear the talent which voluntarily offers its help. We find some brilliant pianist and instrumentalists of other kinds, reciters, singers with magnificent voices, and artistes of indescribable variety, or sometimes we have a concert party giving the whole programme, and occasionally a cinema is sent for a night. Then at 8-30 o'clock one of us gets up in the middle of the hall (standing on a form or table) and after reading a few verses of Scripture, ask all the men to join in the Lord's Prayer, which, as a rule, they do most reverently; and soon after that the building begins to empty itself, and at nine o'clock sharp comes 'Lights out.' But we have wonderful opportunities during the evening of coming into close contact with the men individually, and very interesting are many of our interviews. A man, e.g., happened to see me looking at a photograph, and, taking a look at it, he inquired in real Cockney twang, ‘Wife and kid?' And then proudly be produced a photo from his pocket – his wife and family – and he took delight in telling me all about himself, and how has family were doing, and so forth, and in that way I made a good friend in that man. Then, a lad one day confided in me that he had just had news of the death of his mother, and, as a chum told me later on, the boy had sobbed all through the night before as he lay in his bed; and as I gave him my sympathy I was able to find out how anxious he was to 'play the man' out here and to be a good soldier of the Great Captain. Then on two occasions I got into intimate relations with two men through their asking me for a Testament each, requests which, through the kindness of some anonymous friend, I was able to grant, giving them a little khaki Testament with Lord Roberts' message in front. And to-day a man told me he was sending home money to his wife. 'That,' he said, 'is what a man cannot do unless he keeps steady, and I,' he went on, 'have been T.T. for over six months, and I intend to keep that way.' That was an opportunity which I did not fail to grasp. 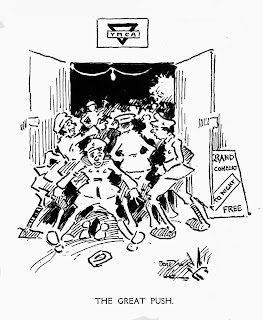 "Our work is not done by any means after the hut is closed; but it would take too long to tell the ways in which our time is taken up till bedtime. I will only say we are not idle nor pleasuring. But I must tell you about a night not long ago. A great many troops had come in during the day, and were leaving that night again. If we had closed the hut at nine, the men would have been practically homeless till twelve, with only cold bell-tents to sit in. It was a wild night, so we got leave to keep the concert hut open for the men going off; and you would have been glad and sorry if you had come in amongst them. At one end of the hut they were holding a sing-song, and it was grand to hear the glorious 'chorusing' of 'When Irish eyes are smiling,' 'The Dear Little Shamrock' 'Loch Lomond,' and such old favourites. Then all over the floor were lying men, some smoking, some asleep, but all ready for the road, with full kit, rifle, &c ready to buckle on at the word of command. Poor fellows! We could not help wondering how many of them would come back to the Homeland again. When a quarter to twelve came the 'Fall in' rings out, and forth the men go, and it is not very long till we see them, with steady tramp, a mass of brave big boys, of whom any Britisher could be proud, marching away into the darkness, eager to do their best for God and King and Fatherland. It was a sight one could never forget, and it made me envy them; but I thanked God that I was allowed to do even my little to help them on their way.

"The Y.M.C.A. has done, and is doing, magnificent work for the men out here, and time and again men have spoken to me thankfully of the part it plays in this great struggle. The temptations out in France are something fearful, and, I am sorry to say, I have heard confessions of heart-breaking falls; but when we get hold of such a man, we speak to him as a man to a man, and I trust our work in that way has not been all in vain.

"I have wandered on in this letter, just putting down what has come into my head. I would love to be talking to you, for I could describe to you all my work and life, as I cannot write it. I hear very interesting stories of life in the trenches, of bayonet charges, and such awful experiences, and probably if I go to the other camp I shall hear more interesting tales still."

This article by "Southern Presbyterian" appeared in The Witness, 17th March 1916.

Posted by an extract of reflection at Thursday, March 17, 2016