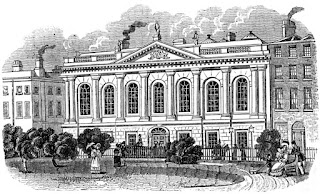 Of the institutions for public instruction in Ireland, accidental circumstances happen to direct our attention first to the Royal College of Surgeons: an institution which, without meaning to disparage any other, we venture to assert, has attained a higher degree of celebrity, and secured a greater portion of public confidence, than any similar one in these kingdoms. This college was established by Royal Charter in 1784, and in 1796 was entrusted by the legislature with the duty of inquiring into the qualifications of surgeons, seeking to be appointed to the care of County Infirmaries. In 1806, the college buildings in Stephen's Green were erected at the public expense, and in 1825, the front was remodelled, enlarged, and improved, and the present museum and examination-hall built, at an expense of seven thousand pounds, the accumulated surplus income of several years. On this occasion, the foundation stone was laid by the Marquis of Wellesley, accompanied by the Commander of the Forces, and many other persons of distinction. In 1828, a new charter was granted to the college, for the purpose of enabling it to adapt its system of education and government to those changes which had taken place in the state of the country, and of society, in half a century. The system of education adopted by the college is distinguished from that of London and other places by the extent of the exercises, the long period of study enjoined, and the severe public examination to which the candidates are subjected.

One of the earliest acts of the college, was the establishment of its school of surgery, a department of the institution which has been eminently successful, and to which Dublin is principally indebted for the advantages the inhabitants enjoy from an annual expenditure by students resorting to the schools for instruction, amounting to a sum little less than one hundred thousand pounds.

In this school every branch of medical science is taught by the respective professors, except botany, the funds not being at present sufficient to support the expense of a garden. This is, however, an object to which the in embers look forward with every hope of its attainment. The buildings appropriated by the college to the accommodation of the school, are, a theatre capable of containing four hundred persons, a chemical laboratory and smaller theatre attached to it, a museum for the illustration of the daily lectures, and a theatre for anatomical demonstrations, with extensive apartments for the study of practical anatomy. A new chemical laboratory has just been erected to accommodate the great increase of students in this department, and it is proposed to devote the present chemical laboratory and theatre to the accommodation of the professors of materia medica aud medical jurisprudence.

The apartments appropriated to other purposes in the college, are contained in that part of the building which fronts Stephen's Green. They consist of a large room in which the meetings of the college are held, a library, a museum, examination-hall, and various apartments for the accommodation of the officers of the college. The meeting-room is a finely proportioned apartment: it contains a portrait of Dr. Renny, a memorial of the gratitude of the college for his most disinterested exertions in forwarding the interests of the institution; and also one of the venerable secretary, Mr. Henthorn, who, for nearly half a century, has devoted his time and efforts to the service of the college. The library, which was greatly enlarged a few years ago, by the expenditure of two thousand pounds from the funds of the college, consists of a valuable collection of books in every department of medical science, and the collateral branches of knowledge; it is particularly rich in books on natural history, and in transactions of learned societies. The museum is a beautiful room, and the collection one of great value. The compartments in the gallery are occupied by a regular series of beautiful preparations illustrative of the different organs subservient to vital existence, with another series, illustrative of the changes to which these organs are liable from disease. The lower compartments are occupied by an excellent collection of skeletons. This museum, which has been created within the last twelve years, is highly creditable, as well to the college as to the two gentlemen, by whose exertions it has been brought to its present state of perfection. In the museum there is a bust of Mr. Shekleton, the late curator, who lost his life in the discharge of his duty, which he executed with unexampled zeal, perseverance, and industry. He died from the consequences of a wound inflicted in dissection. In a smaller adjoining museum is a collection of admirably executed anatomical models in wax, procured in Paris, at an expense of five hundred pounds; the munificent present of the Duke of Northumberland, who frequently visited the museum of the college, and took great pleasure in examining the preparations, respecting which he possessed a degree of information seldom to be met with among persons not educated to the profession.

We regret that our limits do not permit us to give a fuller account of this valuable institution than the above hasty sketch, but we hope that it will have the effect of inducing our readers to visit it, and learn what may and has been done in Ireland by steady perseverance, judicious arrangements, public spirit, and an honest application of funds to the purposes for which they were destined.


Posted by an extract of reflection at Wednesday, October 14, 2015