The brave men of Ulster now making a stand
'Gainst those who are trying to ruin their land,
Stand shoulder to shoulder with courage and nerve,
Resolved from their purpose they never will swerve.
Resolved they will conquer, or fighting, will die,
Under Rome's fell bondage they never will lie;
Freedom they were born in, free men they will be,
While Ireland an island is spanned by the sea.
Their birthright was purchased by brave men of old,
Whose deeds are emblazoned in letters of gold;
Their cause was a just one, they suffered, they bled,
The enemy shattered, was vanquished, and fled.
Now Ulstermen feel they are put to the test,
And will leave to their sons a similar bequest;
A brave man doth lead them, who all hold most dear,
With trust in their God they have nothing to fear.
Their Leader (Sir Edward), a man firm and bold,
Has told to all traitors they will not be sold;
His counsel and wisdom a marvel to all,
With him they will conquer, or with him they fall.
Let the Cabinet beware — at their door is laid
This terrible crisis they themselves have made,
Pass Home Rule into law at the Nationalist call
The Empire is shaken, will totter, may fall.
"Exclusions," "Concessions," are part of the game
Of men in office to continue the same;
Let our leaders be  firm, by their Covenant stand,
Soon peace will be reigning throughout our dear land.
When Home Rule — that horrible nightmare – is dead,
And true sons of Ulster have nothing to dread,
A monument raise to our true, noble friend,
Who kept our flag flying on high to the end. 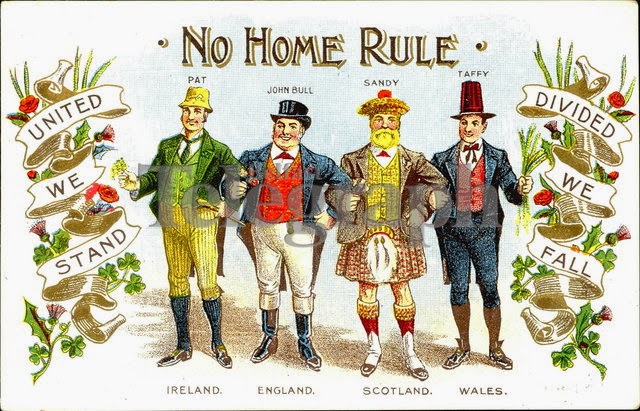 Posted by an extract of reflection at Saturday, March 08, 2014