The Queen's Visit to Ireland (Victoria that is...) 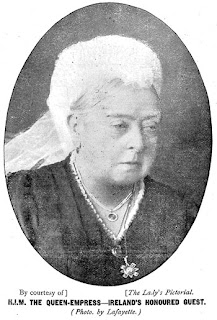 The Spirit of the Nation.

Contempt on the minion who calls you disloyal,
Though fierce to your foes, to your friends you are true,
And the tribute most high to a head that is royal,
Is love for a heart that loves liberty too.
THOS. MOORE.

THE unexpected happened once more when it was announced that the Queen was coming to Ireland. The progress of events in the closing year of the nineteenth century has been remarkable, and for our country perhaps the most striking feature of it is Her Majesty's visit and the consequent revelation that there exists here undiminished loyalty and a healthy public opinion, which lives and has its being among all sects and classes, in spite of and independent of Party or Politics, Loyalty to Queen antipathy to British government, and a longing for Home Rule, can and do exist together, and this loyalty is just one of those things of which more might have been made.

Ireland greeted with a spontaneous enthusiasm and loyalty the aged Queen-Empress, who, accompanied by H.R.H. Princess Christian, H.R.H. Princess Battenberg and family, landed at Kingstown from the Royal Yacht, and entered the Capital on the 4th of April last. 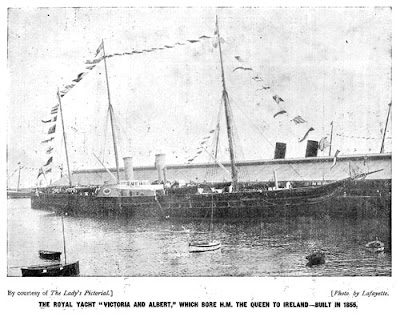 Thousands poured into Dublin "to see the Queen," and as usual the Queen brought "Queen's weather" with her. The sun uncovered his face and shone brightly on waving plumes and burnished accoutrements, and on the crowds, who, elated by demonstrative enthusiasm, were eager to catch a glimpse of, and to offer their warmest Cead Mille Failthe to the wonderful old lady who stands for so much that is noble and humane in the spirit of the age. In 1837 O'Connell declared that a hundred thousand Irishmen were ready to defend the Girl-Queen; this visit has proved that the Liberator's sentiment has not -- even after sixty-three years, forty of which spelled absence -- abated in health or strength one jot. 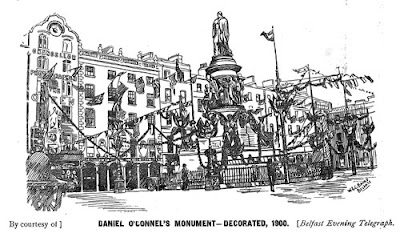 No political significance attaches to the person of the Sovereign, and no such bearing was read into the visit. Her Majesty's welcome was therefore a truly national one, and one which for affectionate homage and loyalty could not have been excelled in any Tory stronghold. Her progress through the city was one triumphant pageant, and the decorated highways, and illuminated streets -- which eclipsed the Golden Jubilee decorations of London in 1897 -- fitly interpreted the spirit of our nation. Doubts indeed were expressed as to the reception likely to be accorded to Her Majesty, but no one who judges the Celtic spirit impartially could have really feared that Queen Victoria on the occasion of her coming would be received by the Irish race with anything but the gallantry and chivalry due to a gracious woman, and the loyalty a good Queen has a right to expect. Political and Party feelings may run higher in Ireland than elsewhere, but this does not affect our just appreciation of the Queen, who dwells far above the plane of political intrigues and prejudices. 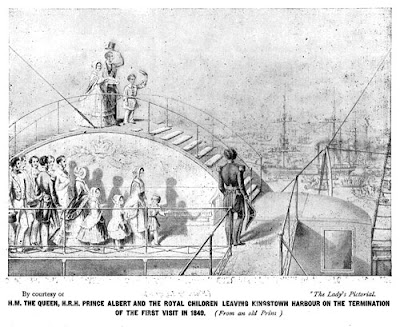 Her Majesty's previous visits to Ireland only number three. The first in 1849, when she came as a happy wife with three little children. The Royal party touched at the Cove of Cork -- since known as Queenstown -- thence voyaged to Kingstown, and on the 6th of August entered Dublin.* Of this visit we are enabled through the courtesy of the proprietors of The Lady's Pictorial to present the readers of The Open Window with two souvenirs, one a portrait of the departure from Kingstown, and the other a unique reproduction of the signatures of the Queen and the Prince Consort, as they appear in the historic "Book of Kells" (St. Columbus' Book). 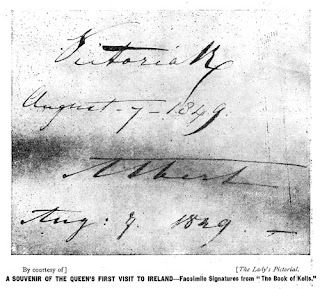 Four years later (August 29th, 1853) the visit was repeated, in order to be present at the great Irish Exhibition; and again in 1861 (August 21st) -- just before the Prince Consort contracted his fatal illness -- she honoured our country with her presence, making a tour of the Lakes of Killarney and inspecting the Curragh Camp.

The visit in 1900, however, is the most memorable, and furnishes the historical annals of Ireland with certain events which will illumine its political history in the coming century. In itself it is memorable enough (Royal visits to our island are few and far between, and forty years' absence makes presence noteworthy), but there were certain "breaks" in Court traditions, inaugurated by the Queen herself during it, which render it remarkable in a striking degree. It was, for instance, the Queen's pleasure to have, for the first time in Irish history, a Roman Cardinal at the same table with an English Sovereign. Her Majesty invited Cardinal Logue to dine with her, and it is worth recording that he was described in the Court Circular as “Archbishop of Armagh," without any such modifying epithet as "Roman Catholic" or "titular." Jesuit Schools (which are "illegal" institutions by Statute) were visited in person and favoured with Royal compliments; so, too, the Vincentians and the Carmelites, the Sisters of Mercy and of Charity, received Royal attention. This is the first time since the Revolution that Religious Orders have been marked out for Royal recognition and approval, and thus brought into direct relations with the Throne. 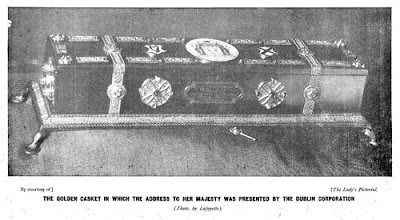 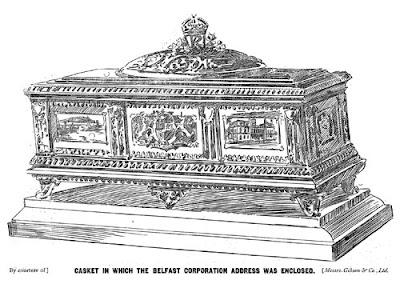 Then the scene during the presentation of the keys of the Ancient City of Dublin: to Her Majesty, was one unexampled in Irish history, and the enactment of the ancient custom was carried out with a magnificence and realism which will form an interesting chapter in future histories of our times. Altogether this visit to Ireland deserves to be numbered among the remarkable achievements of the Queen. As a merely physical feat, at her great age, it is remarkable, and rendered more so by the amount of energy and almost youthful enthusiasm displayed in carrying through her exacting programme of parties and functions. Personally the Queen looked well. Her Majesty's milliner had been more successful than usual, and the suggestive shamrocks gave the coup de grace to a beautiful toilette. Although looking her age, her face was full of pleasure and happiness -- in recognition, doubtless, of the sincerely affectionate greeting of her Irish subjects.

The whole visit seemed to have been planned with consummate tact, in order to mark the Queen's desire, in the closing years of her long and inspiring life, to see the obliteration of the misunderstandings between the Irish and English nations and between the "divided Irish" themselves. 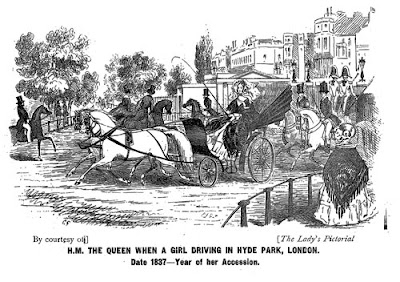 Let us close our notice of the historic event, by expressing the hope that ere long the Queen will

"Come back to Erin,"


confident that neither Saxon nor Scottish hearts have ever joined more fervently than Celtic ones in the familiar strains of the National Anthem: -- "God Save the Queen."

Posted by an extract of reflection at Thursday, August 08, 2013