The Annals of Lisburn and Vicinity (pt2) 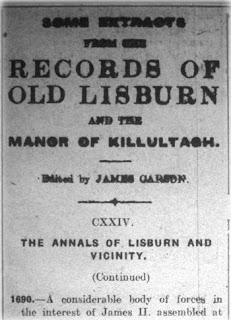 1690. -- A considerable body of forces in the interest of James II. assembled at Lisburn on the arrival of King William's army; they abandoned the town without making any attempt at its defence.

1690. -- Duke Schomberg made Lisburn his headquarters in 1689-1690. He resided in a house situate in Castle St., nearly opposite the entrance to the Cathedral. King William on his march through Lisburn, June 19th, 1690, dined with Captain Johnston and Duke Schomberg in the house of George Gregson, a Quaker. The Captain's quarters were in Gregson's house, the site of which is at present occupied by the Northern Bank.

1690. -- King William III. during a delay at the crossing of the Lagan near Lambeg, lunched with Mr. Wolfenden at his house -- Harmony Hill. The original name of the residence was Waterside, its modern name, Chrome Hill. At Lambeg the King had the well-known interview with Rene Bulmer and his wife, French Huguenot refugees.

1699. -- Louis Crommelin obtained a patent for establishing the linen manufacture at Lisburn, also a grant of £60 per annum for the support of a French minister to attend to the spiritual needs of the French refugees who had settled in the town.

1701. -- Louis Crommelin erected buildings and works for bleaching and preparing linen on the ground now occupied by Hilden Thread Works. Later when writing a report he requests those disposed "to erect bleacheries" to visit his concern at Hilden, adding "it will serve them as a model." Another plot of ground further down the river was also acquired and called "New Holland" from the circumstance of several Dutch bleachers being engaged.

1707. -- The town was burned to the ground by an accidental fire. The Castle shared the same fate, and was never rebuilt. First Lisburn Presbyterian Church was entirely consumed. The Cathedral escaped serious injury, with the exception of the wooden bell tower, which, with the bell, were destroyed. The splendid set of musical bells presented by the Countess Conway were melted into solid masses of metal.

1720. -- The French Huguenot Church was situate in Castle Street, practically on the site of the Urban Council offices. The French congregation, after being in existence for over eighty years, ceased to exist towards the end of the 18th century, when the building was converted into a Courthouse. Later, about the year 1876, the Wallace estate office succeeded on the same site.

1721. -- John Gough, the first head-master of the Ulster Provincial School, was born in 1721, died 1791. He was author of a book on arithmetic, which for almost 100 years held the position of a standard text-book in Irish schools. He also wrote a "History of the Quakers," and is buried in the Friends grounds, Railway Street.

1726. -- The representatives of Mr. George Sands, C.E., who died in 1917, presented the Technical School, Lisburn, with two large maps of the Hertford estate bearing dates 1726 and 1729. The town lands and names of then occupying tenants are shown thereon. Also maps of the town and estate bound in 16 large volumes ranging from 1833 to 1865.

1727. -- Louis Crommelin was a native of Armandcourt, near St. Quintin. He lived in Lisburn, and was known as the "Director of the Linen Manufactory." He died in 1727, aged 75 years, and was buried in the Cathedral grounds. The Revocation of the Edict of Nantes -- 1685 -- was directly the cause of giving to the town of Lisburn, during the reign of William III., its French Huguenot population and the linen industry.

1740. -- The First application of lime as a manure is said to have taken place at Brookhill in this year.

1740. -- Napper Tandy, a prominent United Irishman, and the hero of "The Wearing of the Green," was the son of James Tandy, a linen manufacturer, who lived in Bridge Street Lisburn. He was born in 1740, and died in France in 1803.

1740. -- The Marquis of Hertford granted leases of his whole estate for three lives or forty-one years, at from two to five or six shillings an acre, which proved a great incentive to the improvement of the property and the prosperity of the inhabitants.

1759. -- William Todd Jones, a celebrated politician and pamphleteer of the "'98 period, was born in Lisburn about 1759, died 1818. He was returned to the Irish Parliament in 1783 as member for Lisburn. Mr. Jones resided for a time in Homra House, Curry's Glen. He is said to have been a descendant of Bishop Jeremy Taylor and was responsible for putting into circulation a rather curious story regarding the Bishop's ancestry.

1761. -- The only acid used in the process of bleaching at this time was buttermilk.

1762. -- A law was passed by the Trustees of the Linen Board, that all brown linens should be sealed, so as to certify that each web was of proper length, breadth, and workmanship.

1762. -- The Marquis of Hertford was appointed Lord lieutenant of Ireland, with his son as Chief Secretary.

1766. -- William Coulson commenced with a few looms in a building erected near the County Down Bridge in 1764. Two years afterwards he removed to the present premises in Market Square, and the firm has since won world-wide reputation as Coulson's Damask Weaving Factory.

1767. -- The County of Antrim Infirmary established in Lisburn, with accommodation for fifty patients.

1768. -- Market Square, First Lisburn Presbyterian Church was founded prior to 1687. The church records are practically intact from that date. The original church stood somewhere in the Longstone, and was destroyed in the 1707 conflagration. The church was built on the present site in 1768, rebuilt in 1829 on a larger scale, and remodelled and enlarged in 1873. Owing to the munificence of Mr. Henry Musgrave a fine organ was installed in 1918, at a cost of £1,200. Market Square Schools adjoin the church and were opened about the year 1860.

1770. -- The Rev. John Wesley visited Lisburn five times between 1769 and 1778. He is also said to hare preached in a small house in Bow Street in 1756. An ancient yew tree, under the shade of which Mr. Wesley preached at Derriaghy, is still standing.

1772. -- The "Hearts of Steel" threatened to attack the town in March, 1772. Reinforcements were requisitioned from Belfast, and after an anxious night, when the attack was expected, the danger passed.

1773. -- Hillsborough Parish Church erected. Near the bridge at the bottom of Barrack Hill stood the old church of Crumlin, and its graveyard formed part of the present small park and of the pleasure grounds attached to the Castle. The church was removed to its present site in 1662, rebuilt in 1773.

1774. -- Bartholomew Teeling born at Chapel Hill, Lisburn, about the year 1796 he went to France to aid Wolfe Tone in trying to induce the French Government to undertake an invasion of Ireland. In 1798 he was attached to the expedition organised against Ireland as aide-de-camp to General Humbert. The French army landed at Killala, August 22, was defeated; Teeling was captured at Colooney, Co. Sligo, and executed at Arbour Hill, September 24, 1798.

1778. -- Paul Jones, the famous American privateersman, in his frigate "The Ranger" attacked in Belfast Lough the English sloop of war "Drake." The "Drake" was disabled, and Lieutenant Dobbs, a Lisburn man, who was on board, lost his life in the engagement.

1778. -- "The character of the inhabitants of Lisburn is well established, pride being their principal foible, many of those who from being destitute of fortune, high birth, or education, seem least entitled to vanity, justly deserve this character." From 1770 to 1830 reference crops up occasionally to "the pride of the ladies and the exclusiveness of the linen-drapers." "Linen draper" in this connection was applied to a merchant engaged in the linen industry.

1784. -- The earliest known date for printing in Lisburn. In the collection of Lavens Ewart, now in the Linenhall Library, is a volume containing some of Congreve's Poems printed in Lisburn in that year by Thomas Ward.

1789. -- James Wallace erected in a court off Castle Street a cotton mill, and enjoyed the triumph of seeing the first steam engine that ever whirled in the north of Ireland driving the spindles in his factory.

1790. -- The first mail coach commenced to run between Belfast, Dublin, and Cork, calling at Lisburn.

1791. -- William Henry West Betty, the young Roscius, was the son of a linen bleacher, and passed the early part of his boyhood at his father's house in Chapel Hill, Lisburn. In 1803, at the age of twelve years, young Betty appeared on the boards of the Theatre Royal, Belfast. In quick succession he visited Dublin, Birmingham, Liverpool, Manchester, and on the 1st December, 1804, appeared at the Covent Garden Theatre, London. His success was marvellous, crowds thronged the theatre at every performance. From the time he arrived at the age of sixteen his power over the play-going public, however, began to wane, and when he took leave of the stage in 1824 the house was not half filled. The marvellous boy had degenerated into a very commonplace man. Later as a clergyman he was unable to keep up the attention of a country congregation, even for half an hour. He retired finally, and lived for almost half a century on the ample fortune he had so early amassed. He died in London, August 24, 1874.

(This article was originally published in the Lisburn Standard on 7 March 1919 as part of a series which ran in that paper each week for several years. The text along with other extracts can be found on my website Eddies Extracts.)

Posted by an extract of reflection at Thursday, March 07, 2013