Some Aspects of Scottish Wit and Humour (1919) 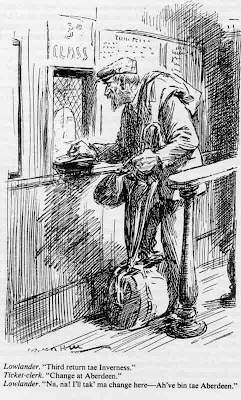 The articles, in the "Standard" which have dealt with Ulstermen and Ulster-Scots lead one to think of one characteristic common to both; that lighter quality commonly called wit. It has been said that the Scottish people do not possess the faculty of being witty. Not only that, but also that it requires a surgical operation to put a joke into a Scotsman's head. We all know of the Scot who heard a funny story one morning, and to the surprise of everybody, had a violent fit of laughter just at suppertime. It had taken the intervening time; for the pith and point of the joke to soak into his humourless brain! Nevertheless, a Scot can be funny, and he does appreciate humour when he sees it, no matter how the general opinion seems all the other way. 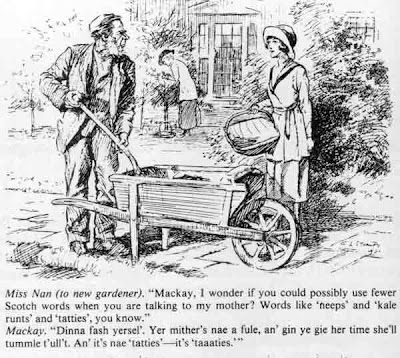 These are few specimens of the humorsome tendencies of the past generation of Scots. Dean Ramsay's "Reminiscences" from which these samples are culled is, indeed, a treasure, and the lucky owner of his immortal work can, when he is so minded dip into its pages anywhere, and find himself refreshed by the charm of his writing. In a future issue we hope to quote and comment on a few more of these stories.

(This article (though not the illustrations) was originally published in the Lisburn Standard on 21 February 1919. The text along with other extracts can be found on my website Eddies Extracts.)

Posted by an extract of reflection at Thursday, February 21, 2013

Email ThisBlogThis!Share to TwitterShare to FacebookShare to Pinterest
Labels: humour