The Romance of the Red Triangle - the YMCA at the Front 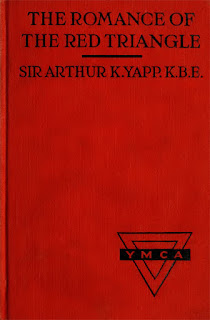 Some years ago while I was working on extracts for my website from the Magazine of the Central Presbyterian Association - particularly on members of the Association who where serving during the Great War - many times I came across references to ministers and men on YMCA service in France.


"Over 2,000 people were present on 18th ult. when the Moderator of the General Assembly presided, and Rev. J. G. Paton, B.D., of Coleraine, who has just returned from the front, gave a graphic account of work in the Y.M.C.A. Huts in France, in which he was engaged for three months." CPA Magazine, November 1915.

"One of our popular young associates -- Mr. Arthur Asboe -- who has for some time past been pursuing his studies in England, with the view of entering the Moravian mission-field, has been accepted for army Y.M.C.A. work in Egypt." CPA Magazine, April 1916.

"Rev. Professor Paul, M.A., B.D., of M'Crea Magee College, Londonderry, son of Mr. R. L. Paul, one of our prominent members, is taking up work in France among the troops in connection with the Y.M.C.A." CPA Magazine, May 1917.


I wondered what on earth could they be doing when the world was entrenched in those muddy wartorn fields of France and elsewhere.

Enlightenment came in the form of a small book I found called The Romance of the Red Triangle by Sir Arthur K. Yapp, KBE, who was National Secretary of the YMCA at the time.

The book was subtitled "The story of the coming of the Red Triangle and the service rendered by the Y.M.C.A. to the sailors and soldiers of the British Empire" and, although it took pains to mention no names it nevertheless gave a detailed overview of the work undertaken during those years - a lot of the time at front itself.

A copy of the book can be found on Archive.org and I would commend it to anyone with an interest in the Great War or the work of the YMCA.

Over time I have come across many other letters and stories in newspapers like this from the Lisburn Standard:

"Rev. J. H. Orr, Hillsborough, occupied the pulpit in Whitehead Presbyterian Church on Sunday, where, during the course of an eloquent address, he related his experiences as a Y.M.C.A. worker amongst the troops in France." Lisburn Standard, Friday, 27 October, 1916.

And in recent years, the increased interest in the Great War and those who served has led to a plethora of websites many of which contain information and photos on the work of the YMCA at the front and beyond and are just a google away.


The extracts quoted above, along with many others, can be found on my website Eddies Extracts.

Posted by an extract of reflection at Saturday, December 29, 2012