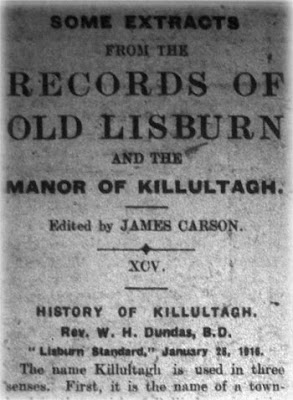 The name Killultagh is used in three senses. First, it is the name of a townland in the parish of Ballinderry containing less than 700 acres, the fuller form of which is Derrykillultagh. Secondly, there was the territory of Killultagh, an old term which is found long before the division into baronies and counties. It may be defined as the district lying between the River Lagan and Lough Neagh; it contained the parishes of Magheragall, Ballinderry, Aghagallon, Magheramesk, and the portion of Blaris north of the Lagan (Reeves). Sir Foulke Conway received a grant of this territory about 1608 A.D.; And the lands of Derrievolgie, with other portions, were afterwards added to the Conway property, so that it included most of the adjoining parishes of Derriaghy, Lambeg, Glenavy, Camlin, and Tullyrusk. This property was called the Manor of Killultagh, afterwards known as the Hertford estate. It corresponds roughly to the Barony of Upper Massereene, of which name various explanations have been given. Sir Phelim O'Neill's chaplain writes it "Massereghna," which is said to mean the "Queens Hill;" Dobbs (Description of County Antrim, 1683) says: "It is Irish Base O Reen, some Irish kings daughter or princess being drowned in that river;" yet again Massereene is said to mean "the beautiful portion" (Dubourdieu's County Antrim).

Killultagh is in Irish Coill Ultagh, the forest or wood of Ulster; Ulster being here used in its narrower sense as corresponding to the counties of Antrim and dying. There is ample evidence that it deserved its name. Sir G. Carew describes it as "a safe boggy and woody country upon Lough Eaugh" (Neagh); and Sir Henry Bagenall speaks of it as "a very fast countrey full of wood and bogg" (1586). There was a note on the corner of an old map of Down (1590) which reads: "Alonge this river (the Lagan) be ye space of 26 myles groweth much woodes, as well hokes (oaks) for tymber as hother woode, which may be brought in the bale of Cragfergus (Carrickfergus) with bote or drage" (Ulster Journal of archæology, vol. iii., old series). South of the Lagan lay a similar district called the territory of Killwarlin, which included the parish of Hillsborough and the neighbouring part of Blaris, Moira, Dromore, Dromara, and Annahilt. Kilwarlin belonged to a branch of the Magennis family called the MacRories. In 1575 Ever MacRory made a surrender of it to Queen Elizabeth and took out a patent for the same, which was in the possession of George Stephenson, Esq., of Lisburn, in 1847, whose maternal ancestors were of this race (Hills MacDonnall's of Antrim).

Killultagh belonged to a branch of the O'Neills, the descendants of Hugh Boye O'Neill. It contained three forts -- Inisloughin (near Trummery House, which, by the way, was built by Captain Spencer about 1652); Portmore, besides Lough Neagh; and one on a mound above the Lagan close to Lisnagarvy. There is a very interesting account of the march of Shane O'Neill against the MacDonnell's of N. Antrim in 1565, part of which I shall quote:-- "He kept his Easter at Fedan (now Fews in the South of County Armagh), when he took his journey Tuesday in said Easter week towards the Skotts, which day he rode xvi. miles and camped that night at Dromemoer (Dromore). The next morning he cut all the Passes or Woods that lay in his way from thence (called Kyllewarline of the M'Cuilin's and Kylultagh of Claneboye, which was xii. mile long) that 10 men may go in a rank, till he came within Claneboye a mile beyond the Pass and camped that night at my Moynnimrock. The morrow being Thursday, he rode towards Gallantry, a mile from Edenduffcarrig (Shane's Castle), where he camped the night" (MacDonnell's of Antrim).

Killultagh in the 16th century was the scene of continual warfare between the Irish and English. In 1515 a proposal was made that fresh English colonists should be sent to Ulster "in order that all the noble issue of Hugh Boye O'Neill be avoided clere and expelled from the Green Castell (opposite Greenore) to the Bann, and be assyneyd and sufferyd to have their habytation and dwelling in the great forest Kylultagh and the Phewx, which habytation and places they hathe and dwellyth often before nowe by compulsion." At a later period the English Government tried to arrange terms, but the O'Neills were very slippery to handle. In 1592 Cormock O'Neyll McBryan was the Captain or Chief of Killultagh, and was desirous of surrendering his estate to Queen Elizabeth and receiving it again to hold in the English fashion. But in 1593 Mr. Solicitor Wilbraham, then newly returned with the Lord Chief Justice of Common Pleas from the Ulster Circuit, writes:-- "We find less obedience and appearance than was the last year. Cormock MacNeill, Captain of Killultagh; Neale McBrian Fertagh, Captain of the Ardes; and McCartan possess their several countries by tnistry and seek no letters patent so long as they may ravin at their pleasure upon the tenants; in no place in this country are the tenants permitted to depart from their lords but at the lord's pleasure, and so thralled in misery. . . . In all our Assizes we endeavoured to manifest to the rude people the merciful proceedings of her Majesty in trials of life for their offences by indifferent jurors which they seemed to admire and embrace." The same year there is a report of "a great prey taken from the Captain of Killultagh." In 1596 Sir Ed. Moore and other Commissioners were at Newry, to draw in the woodmen of Killultagh and Kilwarlin, but none of the woodmen came in to them. It appears from a document of 1597 that some of the chiefs were quite willing to surrender their lands and take them again to hold under Elizabeth, but they were in very difficult position. The English officers and governors did not desire any such settlement, because they used to receive 40, 50, or 200 cows in one place, from the Irish, apparently as a kind of blackmail. Neither did the supreme lord of the Irish, O'Neill Earl of Tyrone, wish it, for it would overthrow his power and make the inferior chiefs depending on her Majesty alone; "he hath feared this course, and hath therefore suppressed all them who attempted the same. He murdered for this matter the Lord of Killultagh" (Cal. State papers). Cormock, who met this fate, was succeeded by his son, Bryan McArt. The latter joined his uncle, Hugh O'Neill, in his rebellion, but was defeated by Sir A. Chichester, and in 1602 the fort of Inisloughin was taken. That was the end of power of the O'Neills in these parts.

In 1605 Conn O'Neill agreed to surrender one-third of his lands to Sir Hugh Montgomery and one-third to Sir James Hamilton in return for their assistance in securing for him the King's pardone. Killultagh was included in Hamilton's portion, and soon after it was transferred to Sir Foulke Conway, who was in possession in 1608. The outlawed Irish, however -- the woodkerne or tories, as they were called -- lurked in the forests and bogs, and naturally tried to hold or get back some of what had been their own. About 1605 it was reported that "Killultagh by reason of strength of bogs and woods was the shelter and lurking place of most of the idle men, thieves, murderers, lawless kerne (with entrance of Bande, i.e., the Bann), which at present are not free of them." In 1610 Killultagh and Braslowe (i.e., Clanbrassil, the district about the mouth of the Upper Bann were it enters Lough Neagh) are described as "a strong fortress, a den of rebels, and as thievish a country as any in Ulster." And two years after the British settlers in County Armagh complained of the robberies daily committed by the kernes of Killultagh and the other wooded countries around.

In this forest there were wild deer in abundance, and also wolves. There are many references to the latter in the Conway Correspondence. On one occasion (1657) George Rawdon, Viscount Conway's agent, was forwarding some dogs to Chester, "which," he says, "it is a pity to send them out of the country. They have been above the Collen and about Mr. Dynes and had some courses with wolves which exceedingly infest the country." I believe there is a place called the Wolf-Bog in the neighbourhood of Colin or the White Mountain, probably because it was a haunt of these animals. Rawdon writes a little later: "I have two more that are kept to hunt the wolf upon every occasion when he commits spoil, and then the people come still to borrow them out." In 1665 they were troublesome and other place -- "the keeper and gunmen are watching the wolves that haunt the Tunny Park almost every night." It would be interesting to know when the last wolf was killed in Killultagh. An old parishioner of Magheragall told me a quaint story concerning one: I give it exactly as I recorded it at the time. "J. H.'s mother lived at Horner's Hill. A wolf once came limping and holding up its paw. She took a thorn out of its foot. Next morning a fine heifer was on the street. No one ever claimed it. Some people said that the wolf brought it." It reminded me of Androcles and the lion.


(This article was originally published in the Lisburn Standard on 9 August 1918 as part of a series which ran in that paper each week for several years. The text along with other extracts can be found on my website Eddies Extracts.)


Posted by an extract of reflection at Thursday, August 09, 2012