What will you do when the oil runs out?

Just when will oil supplies run out and what will you do when it does? It's a question I've asked myself many times but I've never been able to find a clear answer anywhere. Of course if you feel like being pedantic the oil will never actually run out but that is only because the cost of exploration and production will become prohibitive forcing the use of alternative forms of energy.

Since the 1970s there have been warnings that oil supplies are running out and although there are those who reply that there is plenty of oil left the overwhelming opinion seems to be that it could be sooner rather than later.

The issue has become clouded by claims that many countries are grossly over estimating their reserves either for political or economic reasons. Add in other factors like the giant Ghawar field in Saudi Arabia which is now apparently producing water rather than oil (although it still produces about 5m barrels a day) or that Iraq is producing only two-thirds what it did and that Iran is producing well below potential. This reduction in production though is far overshadowed by the increasing demands made on the oil supplies by the growing economies of developing countries like China and India.

The latest estimates I've found put it at about 30-40 years worth but this is a balance between the known reserves which have peaked, improvements in technology which means being able to bring more up and the new fields which are being opened.

But therein lies a major problem. Most of these new fields which were previously uneconomic and have now become viable because of rising demand and increased prices are in places were there is increased risk to the environment. 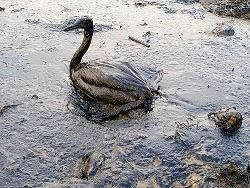 One just has to look the Deepwater Horizon well in the Gulf of Mexico and the subsequent oil leak which currently threatens unprecedented environmental damage and destruction of an ecosystem from Louisiana to Florida on which the livelyhoods of thousands depend. Predictably opponents have come out saying this was a disaster waiting to happen and, because of the conditions and risk, drilling should not have been allowed there in the first place but new fields need to be tapped and with drill sites like Deepwater Horizon now feasible... well... 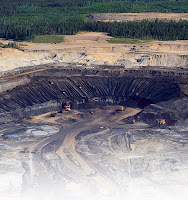 In the push for new sources of oil Canada has permitted the exploitation of its tar sands which is not only devastating the local environment but the extraction of the tar oil is creating more carbon emissions than Belgium and it has been estimated that jet fuel refined from the bitumen creates a carbon footprint over 200 per cent greater than equivalent crude.

It is not only for reasons of climate change that alternative sources of energy need to be explored and brought on line soon.

Oil is a finite resource. The cost of finding new sources is hitting the pockets of everyone. Increased oil prices mean increases in transport costs and production costs. It means that food prices go up... heating costs go up... etc. Many areas of farming have become highly mechanised in order to produce foodstuffs at affordable prices but what happens when farmers can't afford to buy the diesel to run the farm machinery?

Next time you fill up your tank don't just think of the taxes government are taking but think about what its costing the environment to bring it to the forecourt and what you would do if it wasn't there.
Posted by an extract of reflection at Friday, May 07, 2010